When does the 2018 NFL Regular Season Open?

For NFL lovers, the start of regular season football games is something that is looked forward to as soon as the previous season ends. For months NFL players spend the offseason prepping for the start of the next season and teams and coaches start their work to try to become the next Super Bowl Champions. 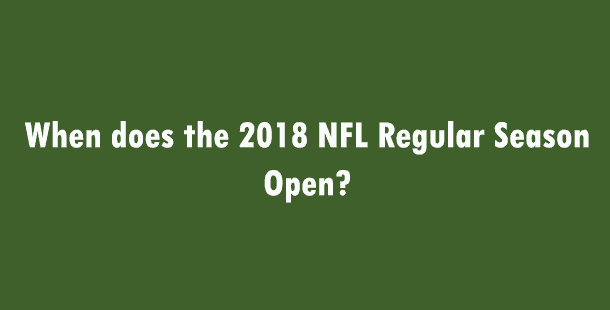 The 2018 NFL Season will start on September, 6th. This season will be the 99th season of the NFL. The first game of the season is always referred to as the kickoff game, and always has one team be the defending Super Bowl Champions. This year, the kickoff game will be played by the Super Bowl champs, Philadelphia Eagles, and the Atlanta Falcons. This game will be played at Lincoln Financial Field in Philadelphia, Pennsylvania. The last game of the season, the Super Bowl, will be on February 3, 2019 and will be played at Mercedes-Benz Stadium in Atlanta, Georgia.

The 2018 NFL season is made up of 256 games that are played over 17 weeks. The NFL consists of 32 teams, and each team plays 16 games per season. Each team is give a bye week, which is a week where the team does not play a game. NFL games are played on Sundays, Monday nights and Thursday nights. The majority of the games are on Sunday, with a Sunday night game each week as well. The last week of the season, each game is an intra-division matchup, which has been the tradition since 2018.

There are some notable games that will take place during the 2018 regular season. The regular season will begin the the Kickoff Game which will be played on September 6th at 8:20 pm eastern time. This game can be seen on NBC. For the past several seasons, the NFL has played games in London. The 2018 season will be no different, as three games will take place in London. The NFL has signed an agreement with Tottenham Stadium in London, stating that for the next ten years, at least one game of the NFL regular season will be played there. This year, the Oakland Raiders will face the Seattle Seahawks at the stadium on October 14th at 1:00 pm eastern time. Two games will be played at Wembley Stadium in London. The Los Angeles Chargers will play the Tennessee Titans on October 21st at 9:30 am eastern time. The Jacksonville Jaguars will play the Philadelphia Eagles at Wembley Stadium on October 28th at 9:30 am eastern time. The NFL will also play a game in Mexico this year. The game will take place at Estadio Azteca in Mexico City. The game will be on November 19th adn will pair the Los Angeles Rams against the Kansas City Chiefs. The NFL has signed an agreement to play at least one game per season at this stadium through the year 2021.

There will also be regular season NFL games on holidays. The tradition of three games on Thanksgiving continues this year. The early game, played at 12:30 pm eastern time, will feature the Detroit Lions playing the Chicago Bears. The afternoon game, played at 4:30 pm eastern time, will put the Dallas Cowboys against the Washington Redskins. The night game will be played at 8:30 pm eastern time and will put the Atlanta Falcons up against the New Orleans Saints. For the second time in Monday Night Football history, a game will be played on Christmas Eve. The Denver Broncos will play the Oakland Raiders at the normal Monday Night Football game time.

Week 15 and 16 of the NFL regular season will have Saturday games played. Week 15 will have a 4:20 pm eastern time game and an 8:20 pm eastern time game. One game will feature the Houston Texans against the New York Jets and the other game will feature the Cleavland Browns and the Denver Broncos. The decision of who will play at which time will be made no later than week 8 of the regular season. Week 16 will move two games to Saturday, December 22nd and leave the other two to be played on Sunday as scheduled. The four games that have the potential to move to Saturday are the Baltimore Ravens versus the San Diego Chargers, the Jacksonville Jaguars against the Miami Dolphins, the New York Giants versus the Indianapolis Colts and the Washington Redskins taking on the Tennessee Titans. The decision of which two games will be moved to Saturday will be made no later than week 8 of the regular season.

The 2018 regular season will be the first season to address the players who choose to kneel for the National Anthem. Players, coaches and staff now have the option to stay off the field while the National Anthem is played, or if they are on the field, they must stand. If a player, coach or staff member who comes to the field decides to not stand, the league will fine the team and the team can decide on fines or discipline for each individual player or coach who does not stand.

The 2018 regular season is quickly shaping up to be an exciting year for football fans. Teams are already preparing and the pre season will be a good indication of what you can be prepared to see come the start of the regular season in September. It is safe to say that every NFL fan is counting down until kickofff in September.